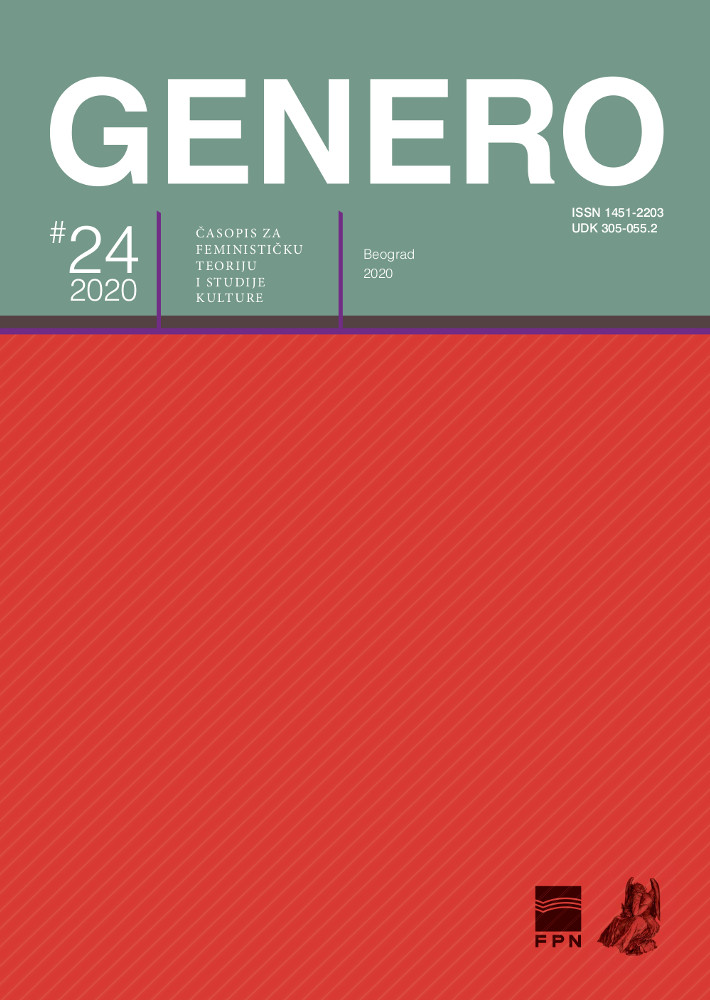 Publisher: Center for Gender and Politics, Faculty of Political Sciences, University of Belgrade

Summary / Abstract: In this paper, we will try to analyse the anti-initiation of the protagonist of the drama Doll Ship into the world of adults, into the world of the hegemony of masculinity. The process that the heroine goes through can be considered as anti-initiation and is embodied in the title metaphor of a doll ship. By changing the fable stages of a fairytale, varying typical situations, and by dialogues filled with jargon and songs, a plot is formed, through which the main heroine, the Woman, (does not) progress. Sharp, cruel banalization serves to demystify and expose common female roles and positions.

Summary / Abstract: Although queer literature can fit into common timelines of the history of literature, this essay discusses ways in which Croatian lesbian fiction challenges and sabotages such attempts. It combines interpretations of fin-de-siècle early lesbian writing (novels The Widow by Josip Eugen Tomić and The Passion by David Pijade) with those of contemporary texts. As for recently published texts, the essay analyzes short story collection Posudi mi smajl (Lend Me Your Smile) and novel Do isteka zaliha (Until the Supplies Run Out) by Nora Verde, the short story “Vrata Pakla” (“The Gates of Hell”) by Ružica Gašperov and the postmodernist short story collection Moja ti (My You) by Jasna Jasna Žmak, in order to show that foreign model should not be uncritically applied to Croatian literature. These texts were published almost simultaneously, which prevents a simple understanding of Croatian lesbian fiction as developing from suffering and secrecy towards affirmation and open displays of identity. Also, the authors appropriate and reinterpret older genre models – in the essay, I show that the timeline of Croatian lesbian fiction is a queer (nonnormative) timeline. Like the coherent chronology, coherent identity also comes under question: Žmak destabilizes it through her postmodernist textuality. The authors of Croatian women’s prose treat lesbian relationships as parts of female self-actualization narratives. This shows that Croatian lesbian (and, more generally, queer) literature cannot be reduced to gay and lesbian confessions targeting a similar audience.

Summary / Abstract: The communication channel in the community of human beings can be sound socioscape ensuring genuine exchange. Conversely, it can be polluted by noise-diverse forms of oppression. The advent of advanced technology and the mutually conditioning relationship between language and discursively conditioned cultural realities expose some of the salient aspects of this dual dynamics. This article looks at Jeff Noon’s short fiction from the collection Pixel Juice in conversation with Douglas Rushkoff’s critique in Present Shock: When Everything Happens Now. It is sensitized both to the thematic and stylistic streaks of the texts in question. They resonate with the key of the reading-writing, as it is generated in the encounters with them. Presenting and demonstrating the characteristics pivotal to the remix – based on the idea and the practice of the potential of/for thriving human communication – the article is suggestive of immediacy, yet it objects to instantaneity. Summoning up revolutionizing thoughts from the past, notably those found in Plato’s and Thomas Kuhn’s writings, it reinstates both the significance of tradition and its remixable nature. While relying on the existing samples, it engenders idiosyncratic content. It plays with the sources preserving their integrity. Celebrating experimentation, it understands the connection with the heritage. It seeks wholesome social responses to individuality and communality. Reflecting on, depicting, and emerging in the intersection of the time axes, it reconsolidates the relevance of redeeming the past, reimagining the future, and resurrecting the present. It is a manifestation of the vitality of the remix.

Summary / Abstract: Since there were plenty of feminist discourses in Yugoslavia, from “women question” discourse of the Party and the government to academic research of sociologist, philosophers, and anthropologists and later feminist activism, there is a need to rethink the possibilities of theory and history of feminist in socialist context. This research aims at connecting different feminist theories with various artistic practices that might have a feminist character. This paper aims to give the analysis of subjects, forms, and meanings of feminist and queer artworks from 1968 till 1990. Considering feminist and queer theories, social, historical, political, and cultural context of socialist Yugoslavia, the paper offers one possible history of feminist art, maps its ideas and forms, and presents the methodological problems that this kind of attempt carries.

Summary / Abstract: The influence of human experience on observations about different physical and non-physical entities has been ignored and even denied for a long time within the framework of Western philosophy, which has been occupied with the question of language, among other things. Mark Johnson and George Lakoff’s cognitive approach to language, which developed in the 1980s, has shown that ways in which people interact with their environment have a strong effect on the ways of understanding concepts. Such understandings, if not entirely then in a fair degree, are realized by metaphors that therefore cease to be primary and only defined as a stylistic device. Taking into account that gender and/or its contextual background are often overlooked in many analyses of conceptual metaphors, this paper endeavours to examine the abstractness of the concepts woman and man through the research in The Corpus of Contemporary Serbian. If the human understanding of abstract concepts comes, at least partially, through metaphors, and woman and man as a subcategory of the concept human are abstract, then man and woman must also be represented through one of the possible forms of the metaphor – metaphorical linguistic expressions. At the same time, the social context in which we are talking and thinking about women and men is marked by contemporary patriarchy and heteronormativity, and this is by no means negligible in its closer definition. Woman and man do not exist, or it is unimportant if they exist beyond human construction and imaginative conceptualization. The fact that something is a construct does not mean that it is without real and dangerous consequences.

Summary / Abstract: Anorexia nervosa is a diagnostic category that is more frequently found in younger women. In its basis is the difficulty of experiencing and mentalizing tension inside one’s body. It occurs due to the conflicts arising from intrapsychic processes, on the one hand, and the penetration of patriarchal norms on the other. This paper relates anorexia nervosa to Lacan’s jouissance or the so-called painful pleasure. Lacan’s theory of understanding female sexuality is important for the feminist (psychotherapeutic) approach. How young women suffering from anorexia nervosa form a relationship with their body, and the degree to which we can speak of their capacity to achieve a pleasure principle is addressed in the second part of the paper. Finally, the paper offers a psychotherapeutic understanding of the directions that need to be followed when working with these clients.

Summary / Abstract: This article summarizes relevant literature in critical border studies and explores how contemporary changes in border policing and management affect the nature of the contemporary state and sovereignty. It asks: If it is not clear where exactly borders are, how does this impact our understanding of state sovereignty? How is the deterritorialization of borders challenging our understanding of territorial sovereignty? How is outsourcing “legitimate means of violence” to non-state actors on borders reshaping the state’s authority? In dominant political and public discourse, borders are seen as a common and defining feature of modern statehood. The modern nation-state political theology has invested the monopoly of governance over borders exclusively to the state. However, contemporary border practices challenge such an idea. Ethnographic studies show that while borders are bound to the nation-state sovereign power, they are also sites where multiple actors come into play and are increasingly disentangled from the geopolitical lines on a map. Ethnographic focus provides insights into everyday workings of sovereign power, a topic often overloaded with abstraction and relegated to the realm of theory. However, while ethnographic studies about border control and management question the prevailing ideas about state and borders, these studies often remain trapped in statist logic and spatial assumptions of the modern territorial state. Considering the historical perspective and incorporating the analysis of economic processes on the state and border could help mitigate the shortcomings mentioned above.

Summary / Abstract: Neoliberalism seems to be a ubiquitous concept, both in anthropological scholarship and in the public discourse, as global social inequalities continue to grow. In anthropology, neoliberalism has been particularly popularized in the past decade and a half, but – as is the case with most anthropological concepts – the consensus on its meaning has not been met. Furthermore, it is not rare to see neoliberalism being used in scholarship without an operational definition. Concurrently with its popularity, the concept attracted numerous criticisms. In this review article, I present a short overview of how neoliberalism has originated, then used, and criticized in anthropology and its sister disciplines such as human geography. Additionally, I focus on the transformations in the nature of the state, governance, and subjectivity that occur in late capitalism, as well as how we can approach those transformations ethnographically. The increased unavailability of welfare provision in neoliberalism has been heavily investigated in anthropology of health and care. I thus particularly discuss how the concepts of care and responsibility have been used in anthropology to that end.